Flirting is the way people communicate their romantic interest in the opposite sex. People flirt almost everywhere: at clubs, bars, restaurants, during social events, on the Internet etc. Often, flirting happens at work. Although we are at the office, we are still humans and we may feel attraction to some of our coworkers. It’s natural since many people spend most of their time at work and their social circle is frequently limited to their colleagues.

More than half of the surveyed white collars admitted to office flirting. Men tend to flirt more than women and it’s not a surprising fact. Interestingly enough, men and women pursue different goals when flirting with the coworkers. For women, it’s just a game, a kind of entertainment during working hours. Men claim that this is their way of showing affection for female coworkers. 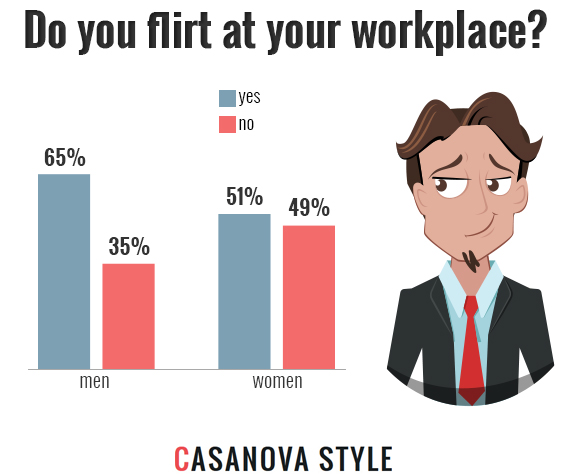 The majority of those who don’t flirt at work say this is not the way they behave in the workplace. 25% responded they hadn’t found the object of their romantic interest yet. Only 6% feel shy or are afraid of condemnation.

According to the survey, employees usually flirt with their coworkers of the same rank. However, 8% of men and 12% of women are bold enough to flirt with their bosses. One out of twelve respondents can be flirtatious even with clients.

Most white collars don’t see anything harmful in flirting at work. Almost two-thirds believe that flirting is OK if it doesn’t make two people feel awkward. In this connection, men are inclined to think it helps relieve the tension and improve the relationships while women believe flirting in the workplace often results in misunderstandings and awkward situations.

Pros and Cons of Flirting with a Coworker

Flirting helps create a more unstrained and comfortable atmosphere in the office. It also encourages employees to spend more time at work and communicate with each other.

Both men and women want to feel their sexual energy and flirting lets them feel more feminine/masculine. The awareness of their sex appeal boosts their confidence and influences their productivity in a positive way.

Reasonable and moderate flirting can help you develop professionally or get a promotion. However, it’s important to know how to flirt with coworker appropriately in order not to spoil the things.

Chances are that work flirt may help you find a love partner. Seeing the object of your love every day and being involved in the same sphere, your relationship will develop with the lightning speed. 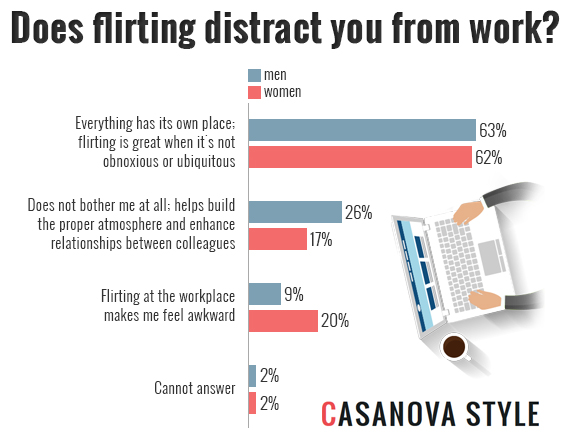 It’s obvious that you go to your office to work, not to flirt. That is why flirting should be timely. You can’t give up on responsibilities.

Some people don’t see the line between the light flirting and an intrigue. Never mix your job with dishonest love games.

Flirting with your fellow workers is one thing but flirting with your female boss is another. If you carry it too far, you have two ways out – you’ll have to shift to another more serious relationship or you’ll be fired in the case you don’t move from words to actions.

If your flirting grows into an office romance that eventually turns out to be unsuccessful, you’ll become the talk of the town for a while. You’ll immediately lose your status and good name among the female coworkers.

How would women and men react if their colleague started flirting with them? 2/3 of the white collars would accept or ignore the signs of flirting at work depending on their sympathy or antipathy to that person. Every fifth man and every tenth woman would start flirting in return. Another 6% of male workers and 15% of female workers would ignore such behavior. Among other possible reactions to flirting the respondents said they would: 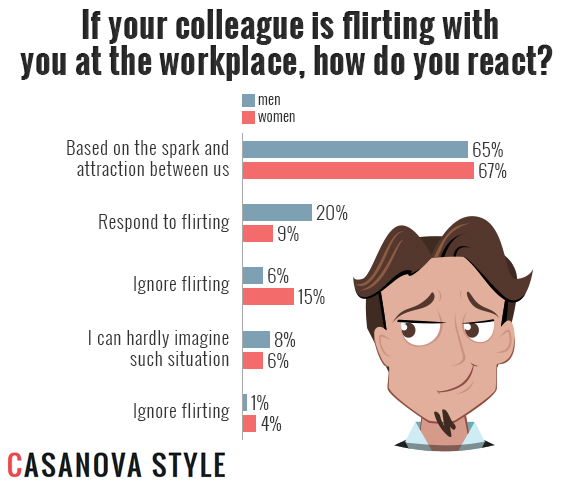 How to Flirt with a Girl at Work

Flirting at work is somehow different from the way you flirt in other places. After all, you’re in your workplace where your job is your priority. If you happened to have a crush on your work-mate, flirting is your best tool to show her your romantic interest but you should know how to use it properly. Here are some useful tips for you.

Use subtle signs. Very often, we don’t need words to communicate our attitude. Our body language, mimics, and gestures can speak volumes for us. If you want to know the basics of how to flirt with women at work, the main rule is to do it in a gentle way in order not to freak a woman out or come across as desperate. One of the safest ways of flirting is a frequent eye contact. Start looking your woman in the eyes more often so that she feels your interest in her.

Smile. Smile is an integral element of any type of flirting. When we see the object of our love, we automatically break into a broad grin. Smiling is most effective in combination with the eye contact. So, when your eyes meet, hold eye contact and smile at her in an easy-going manner.

Be confident. Confidence is the key to success in any sphere of life. The same is with flirting. Whatever you do, you should radiate confidence. If you look her in the eyes, don’t look away too soon. The ability to maintain an eye contact is a sign of inner confidence. Women notice it. It’s especially important to show confidence when you talk to a woman.

Demonstrate your sense of humor. Humor is a great ice-breaker. Moreover, women are attracted to witty men. So, approach your coworker with a witty remark on the event you both participated in or share a funny picture via a web chat.

Compliment her regularly. Again, we should refer to the main rule that teaches men how to flirt at work – keep it subtle. Office compliments differ from the ones you make at clubs or cafes. Here at your office, you’re still in a professional environment, so be discreet. The best option here is to make funny and flirtatious compliments. For example, you can say how you like her coffee cup or compliment her on her tidiness.

Don’t be too serious. You have a crush on her but it shouldn’t turn you into a desperate man seeking her attention. Keep a positive attitude and try to create an easy-going style of your communication at work. Resort to light banter at times but know the limits.

Since some women might misinterpret your flirting and take it for harassment, you shouldn’t rush things. Be patient and watch how she reacts to your endeavors. If she smiles, flirts with you in return, your interest is mutual.

There is also one important thing to consider. Even if a woman is attracted to you, she may not want to flirt with you in front of other colleagues. The reason for it can be simple: she doesn’t want to corrupt her professional image. So, flirt with her mainly when you stay one on one, such as during lunch or after work.

How to Find Love in the Modern Era

Cognitive Biases That Prevent You from Building a Happy Relationship