Romantic Cities to Visit with Your SO in 2018

Traveling with your girlfriend is something that can create a really strong bond between you. Joint memories of how you admired the new countries, cultures, food will always warm your soul and come to rescue in a difficult moment. We recommend choosing 1-2 cities from our article and devote them at least a few days. A cursory sightseeing tour is not able to give you those emotions that you get when deep immersing yourself in the atmosphere of most romantic cities in the world.

Our first stop in the romantic cities in Europe tour is a beautiful place which will completely amaze you. Over the past 10 years, Sevilla has experienced a real transformation. From the stiff city-museum, which was idle in endless traffic jams, it turned into a city of bicycles and trams, a city of freedom, dreaming to rethink its artistic past.

This metamorphosis did not go unnoticed. In 2018, the capital of Andalusia will host the 31st European Film Awards and will be the scene of several episodes of the “Game of Thrones” series. The artistic renaissance of Sevilla will underscore a number of exhibitions in honor of the 400th anniversary of the famous Sevilla artist Bartolome Esteban Murillo.

The historic quarter is one of the largest in Europe, with an area of about 335 hectares, three kilometers in length and two in width. Its historical and cultural heritage attracts many tourists from other countries; many of these places are included in the main attractions of Spain. Among these monuments, the most revealing are located in the Giralda, the Cathedral, the Alcazar, the Archives of the Indians and the Golden Tower. Some of them were declared objects of UNESCO World Heritage in 1987. The Museum of Artistic Arts in Sevilla is the most visited museum in Andalusia and the second most important art gallery in Spain.

Port of Sevilla, located 80 km from the Atlantic Ocean is the only river port in Spain. Accordingly, along the river Guadalquivir, vessels from the mouth of Sanlucar go to Barrameda to Sevilla, although the size of the boats is limited by the conditions of navigation on the river.

Sevilla has a well-developed network of trails and railways, as well as an international airport. It is worth noting the historically developing industry in Sevilla – the aviation industry and the military (shipyards and shipbuilding plants). You don’t know anything about most romantic cities in Spain if you haven’t visited Sevilla yet. 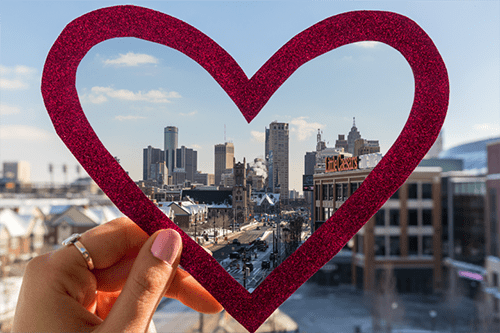 Many of you will say that one cannot call Detroit one of the most romantic cities in the US. After decades of stagnation, Detroit is slowly but surely beginning to reborn. To the brim filled with caffeine, it literally boils with ideas. Young people enter the stage, turning abandoned buildings of former factories into bicycle shops, art galleries, and distilleries. Among the most notable innovations is the hockey-basketball arena downtown and the electro-tram line QLine, which made it easy to get to anywhere in the city. The plans also include three new parks, which will allow extending the embankment (ideal for bike rides – they can be rented at any of the 43 rental locations), and two hotels – on the site of a former wig shop and an abandoned car park.

If your better half is ready for an interesting journey – from the contemplation of a fading industrial city to a resurgent city-art object that is skillfully integrated into the infrastructure of the future by the efforts of young and ambitious people, be sure to devote a few days to visiting Detroit. 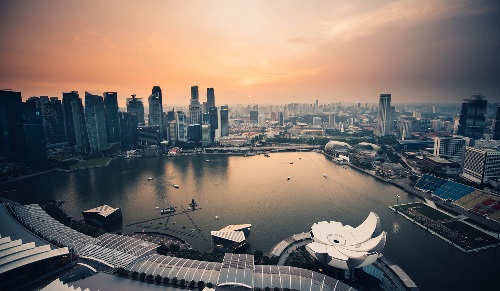 Many people are accustomed to depriving Canberra of attention. Meanwhile, it offers so many entertainments, which no other metropolis could dream of. National treasures are found here at every turn, and new boutique quarters offer gastronomic and cultural entertainment. In 2018, Canberra will host for the first time an international cricket tournament at the newly built arena Manuka Oval. And will celebrate the 100th anniversary of the end of the First World War in the Australian War Museum. It is symbolic that from 2018 it will be on the initiative of Canberra in the national calendar of Australia that a new holiday will appear – the National Day of Reconciliation, which will symbolize the peaceful residence of indigenous and non-indigenous Australians in the same territory.

Our next stop is Hamburg – a brilliant among the most romantic cities in Germany. Adherents of the tradition of throwing a coin to return to one or another place in Hamburg will face a test for accuracy – a coin needs to get to the top of one of the piles, which in abundance stick out of the water near the port warehouses. The warehouses themselves are also built on piles – which is why the city is sometimes called German Venice.

In general, being the largest sea and fourth largest river port in Germany, the port city of Hamburg does not look like it is a port city. No, do not worry, with seafood, which the North Sea generously shares, everything is in order here. And besides that, Hamburg is a very cozy city, with noteworthy architecture, beautiful green parks, theaters, museums, and galleries. Cultural life here is very active. Suffice it to mention that Hamburg is third, second only to New York and London in the number of musicals staged here. Add to this the fact that Hamburg is one of the richest cities in the country, where the offices of many trade firms, banks, and insurance organizations are located, and it becomes clear that there are countless reasons for a visit to one of the most romantic cities in Europe. 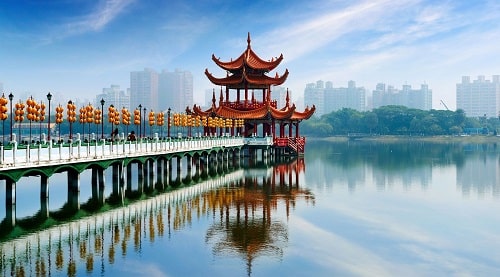 It is a bit unexpected stop for admirers of top romantic cities, but you must visit it. The center of arts and a cultural complex with an area of 100,000 square meters, tracks, and banyan-planted areas – the Kaohsiung Harbor demonstrates Taiwan’s contribution to the experimental architecture. An addition to this will be an impressive cruise terminal – for those who prefer to travel to the city in traditional ways, like Odyssey.

The light metro system connects all these sites with the rest of Kaohsiung. To the north of the city, in the recreational area Xiaogang Shan, you can admire the panorama of the Taiwan Strait from the new observation platform Eye of the Mountain at an altitude of 88 meters. Hurry to see, while Kaohsiung still remains a hidden treasure of Taiwan! 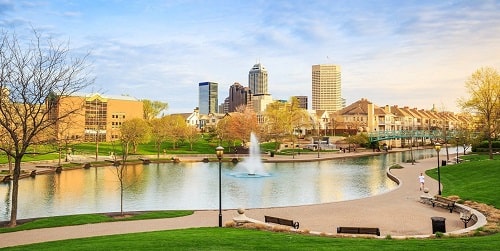 It is one of the most romantic us cities you can visit with your soulmate. The third largest city (after Chicago and Detroit) of the Midwest, the sister city of German Cologne, the capital of Indiana – Indianapolis is a large industrial, financial and commercial center of the country.

Indianapolis has a good reputation among tourists, primarily thanks to historical sites. By the way, the official version of the history of the name of the state and its main city is very simple. The local lands were inhabited by Indians, from here its name was born – Indiana, that is, “the land of the Indians.”

There will be no problems with finding a suitable restaurant here – the capital of the state is replete with all kinds of cafes, bistros, restaurants offering customers and pizza with sandwiches, and “high culinary fashion” foods from chefs. For a quick snack or a budget lunch, Chocolate Cafe, Rene’s Bakery, 96th Street Burgers are great, you can taste Asian cuisine in Thai Cafe, Side Wok Cafe, India Garden or Shalimar. And sophisticated gourmets will enjoy the Corner Wine Bar, P.F. Chang’s.

The city has a lot of cafes and pubs. For example, you can enjoy a cup of freshly brewed coffee by visiting Cornerstone Coffee, Mo’Joe Coffee House, Hubbard & Cravens Coffee Co or Lazy Daze Coffee House, and you can enjoy a cocktail or a glass of good wine at Bourbon Street Distillery, 501 Eagle, Union Jack Pub and Easley Winery.

Some Additional Interesting and Romantic Places to Visit 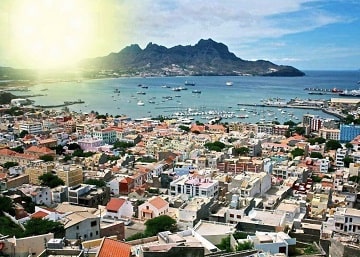 The islands of Cape Verde are an ideal place for exotic and romantic holidays. They are located near the west coast of Africa and combine African, Pyrenean and Brazilian cultural assets. At the same time, Cape Verde has a completely paradisiacal atmosphere. This applies to the weather and surrounding landscapes.

The islands are located 570 kilometers from the nearest mainland African city – Dakar. They have a volcanic origin, and therefore cozy beaches and bays contrast with toothy peaks and gorges. Among these opposites, there are many luxury hotels and tropical bungalows, connected by winding paved alleys surrounded by the Dragon trees.

One of the most popular places of the archipelago is the city of Mindelu on the island of San Vicente. Vacationers swim here in the bays of the Atlantic Ocean, drink local rum and eat various dishes, listening to folk tunes in the national dialect. 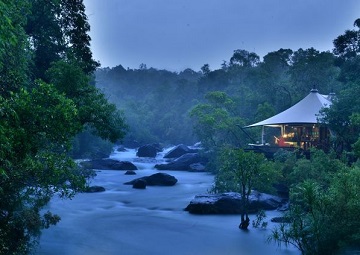 In the south-western corner of Cambodia, there is a huge Botum Sakor National Park. Here the wonders of the nature of this country are concentrated: from evergreen tropical forests to coastal plains and rocks.

About 180 hectares of the park is occupied by the so-called South-West corridor of elephants. It is here that the largest population of Asian elephants lives, as well as a number of rare birds and animals.

In the vicinity of the park, there are a number of hotels and bungalows built in a vintage style for recreation among wildlife. They are located near rivers, picturesque rocky waterfalls and on the coast of the Gulf of Thailand. Here you can not only watch the nature from the habitable territory and swim in the bay but also go on a safari deep into the reserve. 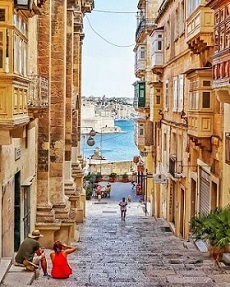 The capital of Malta – Valletta – was named the cultural center of Europe for 2018. The country is located in the Mediterranean Sea, between Italy and Tunisia. The cultures of these countries are intertwined on the island and in just 20 minutes you can “move” from Ancient Greece to the Middle East. This contrast is noticeable in architecture and in food, thanks to the dishes that are served here.

Meanwhile, Valletta is not included in the popular tourist and cruise itineraries, as opposed to Venice and Rome (which is one of the most romantic cities in Italy). So, here you can relax without the undue crowd on island beaches and see the local attractions. The pearl of the city is the Cathedral of St. John the Knight, who came from Malta.

Pin Up Models You Must See to Believe