10 Different Types of Relationships: Which One Is Yours?

Find out who you are in your love life

Our world is versatile, there is a plenty of civilisations with their own systems of convictions, traditions, and superstitions. The conception of romantic relationships varies from one culture to another. Every person is unique – that’s what we all realise. However, there are common qualities any human being has and people can be divided into certain categories. The same goes for romance. Even though you might think your relationship is one-of-a-kind, it is still can be classified by many features.

Relationships then and now: the endless discussion

In past, a man and a woman built a family once and till the end of their days. Not all of them were happy but only kings had the right to divorce whilst the majority of the world population had to follow the so-called traditional pattern. The diversity of relationships has dramatically increased over the last centuries; despite there are certain restrictions in particular cultures, modern people can choose whatever they like and fewer and fewer couples get married. Is that good or bad? In my view, any type has its own pluses and minuses. I merely prepared 10 most common types and leave it for you to decide. Find out in what kind of a romantic relationship you are in!

Let’s start with classics since monogamy is considered to be an ideal type of relationships. As it’s primarily about commitment, many people nowadays aren’t ready to spend the entire life with one and only person. Probably, that’s why a new format of monogamy emerged – serial monogamy, when people get married for approximately 10-20 years, divorce, and find new long-term partners then.

This type is characterised by quite a strong emotional connection between two people who aren’t committed to each other sexually. Although they feel good together, they’re also in need of some “fresh air” and have sex partners outside a relationship. Such couples may attend swinger parties with the purpose to diversify their sex life or invite their “friends” for threesomes.

It is often confused with open relationships but there is a principal difference: a person is emotionally connected with more than one partner simultaneously. What’s interesting, his/her crushes may be totally dissimilar or, vice verse, have a lot in common. I’d say this is a more appropriate title for what we call polygamy as it’s really hard to distinguish from monogamy in its modern variant. 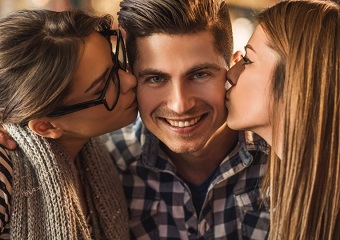 Some people just seek partners for one-night stands. As a rule, they encounter new candidates each time and rarely have more than one meeting with the same person. According to a popular stereotype, guys and girls who act like this are careless. However, many of them behave so due to the fear of commitment caused by psychological traumas or in order to get rid of some complexes. Not sure this really helps.

Everyone must have seen the homonymous movie. Yes, it’s not the same as no-strings-attached relationships for there’s a certain degree of intimacy between partners. Is there friendship? That’s rather a difficult question. A boy and a girl maintain the contact, exchange gifts, and periodically have sex. In films, such friends eventually fall in love with each other. But in real life, this usually happens to just one of them, which may lead to a painful rejection.

This is how a romance between partners who have 10-15 (and more) years apart is called. And I have to confess that I had such an experience with my former boss. What can I say? Modern society still has preconceptions about May-December lovers. This is a kind of exchange: an older partner provides experience and material benefits to a younger one who gives youthful energy and attractiveness away. There is obviously a high risk of a breakup because lovers don’t meet each other’s expectations. On the other hand, it definitely levels your self-growth up.

If a May-December romance normally involves feelings, sugar dating is just about money-sex exchange. Vulgar as it may sound, there have always been courtesans and benefactors. As a rule, we have an older man and a young lady but a vice verse combination is possible too. Today, there are even online dating services for people who seek their sugar matches.

I think you will agree that this is the most common type. Surely, no need to tell much about it: two people meet each other, feel the connection, go out and spend time together. A relationship may be more or less serious. Sometimes, it leads to marriage or, if no huge goals stated, partners just break up and kick off new searches.

Although this term is more often referred to men’s relationships, a boy and a girl can be bros as well. Unlike friends-with-benefits, this connection is fully platonic. Albeit both partners may be attractive, they aren’t interested in one another sexually and romantically. Instead, they can give advice to one another on how to fix various dating issues.

We’ve finally got to the superior level. Soulmates aren’t necessarily married but they are 100% committed to each other emotionally and physically. There are no absolutely compatible people yet true love unites a man and a woman with similar worldviews. It’s not about seeing your partner through pink-tinted glasses – they accept each other’s flaws and are eager to help fix them. This kind of love is rather difficult to find but everyone has chances!

Wrapping it all up

Love can be as versatile as you can imagine. Being aware of the core peculiarities of different types, you will easily understand what you need. Hope my simple guide helps you make the right choice! In fact, you don’t have to stick on just one type if you want to try something new. Remember about safety, be sincere, and analyse your deeds! Wish you good luck on your love path.

10 Habits of Couples in Healthy Relationships