In most cases, breakups hurt pretty badly, but they give us the opportunity to look at ourselves from a different perspective, they test us. Our lives turn upside down with a breakup depriving us of the remains of self-esteem and common sense we once had. Apart from this, we often end up doing something we’d never do normally, like getting a tattoo or flying a few thousand miles to another country.

So let’s see how guys usually deal with being dumped and what they feel. Below are ten common ways men try to ease the pain after breakups.

Depending on how long relationships lasted, the loss of appetite can be a normal symptom when recovering after a breakup. Some guys just can’t make themselves eat, giving up food completely, and this may last up to few days. The thing is that you never know what a breakup may bring to you. Who knows, maybe it’s a start of a completely new chapter in your life that will make you a better person in the end. And giving up food, in this case, doesn’t seem like the right thing to do when dealing with a breakup.

If it was a girl who broke up with us, things get even more logical. By finding a new partner right after a breakup, we try to fill the void that has left after the relationships ended. When there’s someone by our side, this person gives us a boost in self-worth, so after losing this person, we immediately need to find another source of this self-worth as soon as we can. And, of course, this means replacing a life partner with someone else. Sometimes it happens only a few days after previous relationships ended, that’s why a lot of girls think that their exes never really cared about them.

How to deal with a breakup if your ex-girlfriend lives in another country? Easy. Waste all the money you have to travel to her home and try to make everything as it was before. There are a lot of stories on the web with guys telling how they booked a flight to the country they’ve never been before to find their loved ones and win them back. The thing is that in contrast to movies and TV shows, such things don’t work in real life.

4) Having a lot of one-night stands

This is how men deal with breakups usually. Sure, having one or two occasional one-night stands is completely normal, but turning sex with random girls into a lifestyle is not the best way to cope with being dumped. One night spent with a girl you barely know won’t solve your problems. This way you can only get distracted from a breakup for some time. And right after the girl leaves, you get back to destructive thoughts you tried to get rid of.

Sure, random sex can boost your confidence and self-esteem a bit, but the thing is that the attempts to turn one-night stands into the source of self-esteem won’t work in the long run. You can’t take it from without; it only must come from within.

Cutting all contacts with your ex means putting a barrier between you and all those negative emotions you get from a painful breakup. It doesn’t take a professional psychologist to understand that talking to an ex-girlfriend can make everything even worse and won’t change anything. If you still want to get her back, talking to her will make you feel horrible, so there’s nothing wrong with avoiding all contacts. Sometimes girls think that it’s some kind of revenge, but in fact, it’s just an attempt to preserve emotional wellbeing. If you want to know how to cope with a breakup, it’s probably the best way to do so. Cutting all ties with the girl will help you heal faster. Continuing to see your ex and talk to her will get you nowhere.

Sometimes we need to lay off some steam after a difficult breakup, so we start acting like douchebags. When talking on the phone with our ex-girlfriend, we may start being rude and accidentally say something offensive or begin calling names. It’s pretty understandable too; after all, it’s our heart that was broken, not hers. The same thing may happen to our friends and relatives who happen to be close to us at the moment. It doesn’t mean that we’re bad guys, no. It just shows that it’s hard to keep our emotions under control in such situations. It’s one step from love to hatred.

Another way of coping with a breakup is to start ignoring everything and build a wall in one’s head to get away from problems. Guys often do such trick when girls try to talk about something uncomfortable to them. But when a situation gets painful, things become even worse. In contrast to women, we can easily divide our thoughts and feelings into sections or categories, so it gets simpler to focus on something else and keep all the negative emotions boxed up. 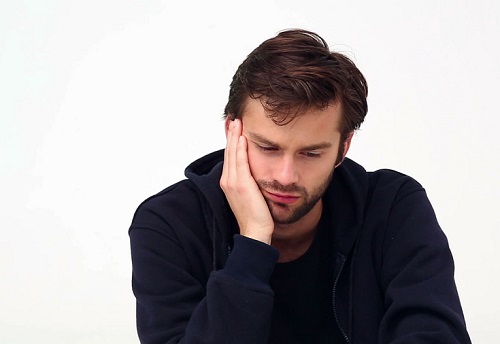 f the breakup was really rough to us, we may start acting like jerks with our exes. And, of course, the ruder we are with them, the harder the breakup is to overcome. For us, it’s the way to cope with emotions that overwhelm us and hide the pain. But don’t think that a breakup is an excuse for acting like a douchebag; it’s just an explanation for our behavior. It’s also important to understand that most of your jerky actions are about you and not about other people.

Nobody likes being shouted at for no apparent reason. Remember the time when someone completely strange to you suddenly started acting like a jerk, getting mad at you or starting yelling for something that wasn’t worth such a blowup? In most cases, this negative reaction is linked to some problems in that person’s life. When someone reacts too emotionally or negatively to some small things or events, it’s definitely about their emotional wellbeing and problems they may be experiencing right now, and you have nothing to do with this. The main thing here is to try to respond calmly. This way you can prevent the situation from getting worse and calm the person down. The same thing goes for your anger to.

How do men cope with breakups this way? They don’t. If you feel that you want to do or say something offensive to your ex, just try to calm down and rise above it. It doesn’t matter if she dumped you, it’s your life, and everything that happens in it is only about you.

This one probably concerns those, who are no older than 18 or 19. If it’s about you, then you may know how it feels. It usually happens like this: a guy is dating a young girl. Then she breaks up with him and starts dating someone a bit older. A dumped guy wants to win her back by becoming cooler than his ex’s new boyfriend. And the only things he can come up with are piercing his lip, nose, ear, etc., or even getting a tattoo. Well, it’s a dumb way to overcome the problem. When asking yourself: “How do guys deal with breakups?” this scenario shouldn’t come to your head, pal. There are better ways.

And finally, the most popular way of dealing with a breakup: getting drunk. However, in most cases, it’s a one-time act, after which, guys turn to other variants. The algorithm is simple: you drink as much as you can to wash all the memories about your ex away from your head. The bad thing about this method is that it’s a temporary solution, but at least your friends will gladly support you.

No matter how painful the breakup was, you should focus on bettering yourself first. Remember that breaking up with someone is hard, so even if you’re still mad at your ex, you should understand and accept her decision. But nothing stops you from trying to get your loved one back, just make sure that you’re capable of doing so.

30 and Single: a Disaster or a Chance?

The Not-So-Attractive Truth about Modern Dating