Sure Body Language Signs She Likes You

When a girl flirts with you, you consider that as the call on approach. However, sometimes, a spicy smile and sparkling eyes are more about common courtesy than sympathy for you. The same happens when sales consultants want to sell you a jacket or a smartphone.

In fact, behind this seemingly trivial difference are the broken hearts of millions of people who have taken people’s friendliness for flirting. For example, a woman smiles at you and makes eyes, and you, being a genuine alpha male, ask her out on a date. What do you get? “Sorry, I cannot. And, by the way, I’m married.”

Hardly trying to censor your internal indignation, you don’t understand how this could happen. The very thing is that men and women estimate the friendliness of the opposite sex differently. A woman may perceive male friendliness as increased interest in her personality, and a man, being obsessed with his own vanity, can be mistaken for flirting everything that goes beyond the female, “Hi, how are you doing?”.  Of course, that’s a bit of an exaggeration, but a prerequisite to every second pick-up line is someone’s ordinary courtesy. If you want to find out about their true motives, you should learn about body language signs of attraction.

Body Language Signs of Attraction: What Are They?

What can body language tell you? Having learned to decipher the secret flirty body language signs that a person sends you in addition to words, you can both help improve communication and understand the needs, desires, and feelings of other people. Body language can have different manifestations, and often, it can be unwittingly. Understanding of the various components of non-verbal language will help be more aware of the reactions you evoke. Facial expressions, eye contact, body movements and gestures along with speech and tone of voice can transmit a huge number of signals. Therefore, understanding of how you use them to your benefit will help have more effective communication in general.

Signs She Likes You: Body Language

In addition to verbal communication, girls actively use non-verbal signals. Female body language signs always indicate their attitude to a life situation or an interocular. Therefore, pay attention to the following body language signs she likes you if you want to go to the next level.

Eye contact is a girl’s offer to approach her. In this case, its duration plays a big role. Of course, you do not need to use a stopwatch. In fact, you will understand when she accidentally looks at you, and when she tries to lock in her interest, having eyed you keenly. It is not necessary to be Sigmund Freud to understand when she looks at you precisely as a man, and not as a casual passer-by.

She Doesn’t Touch Her Smartphone

She tries to maintain eye contact during the whole meeting. As it has already been mentioned, this testifies to her genuine interest in the process of communication. You understand that such an effect is completely lost if you grab your phone all the time. If she doesn’t touch her phone every 10 minutes, and she is completely immersed in the “setup” of the emotional connection between you, then it is one of the signs she likes you.

She Doesn’t Keep Her Arms and Legs Crossed

By crossing their arms and legs, people unconsciously inform about some negative attitude, using their own body as a defense mechanism. This posture instantly blocks any attempt to establish contact. However, if she doesn’t cross her arms and legs, then she feels relaxed, demonstrating her openness towards you.

Touching your hand lightly, she tells about her silent support. When a girl uses body language, telling something touching or comforting, she gives meaning and value in her words. Touching the shoulder or elbow speaks about her understanding and empathy. Besides, if your girlfriend is one of the kinesthetic learners, then a touch is her own way to get to know you better.

She Nods and Smiles, Listening to You

If the girl smiles and slightly nods, listening to your stories, she subconsciously demonstrates her attention and interest in your words. This can be called effective non-verbal feedback. And if she does that, making long-lasting eye contact, it can be about one of the body language signs of falling in love.

She Reflects Your Pose

If you see that a girl subconsciously repeats your body position, then it means that she feels a connection with you. When copying a pose, you tune in to your interlocutor, sharing their mood. So, if you notice something like that, you can be sure that a girl wants to be with you on the same page. 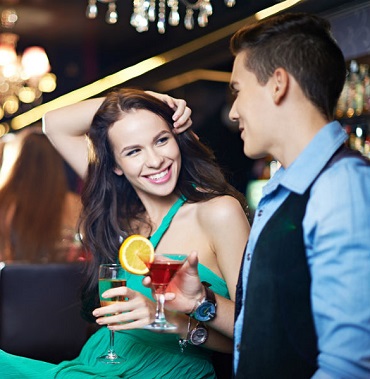 She Actively Shows the Most Common Non-Verbal Signs

Psychologists call non-verbal cues another reliable way to recognize female flirting. If she purses her lips when you look at her, plays with her hair or tries to fix them for no reason, and in general, she looks excited or embarrassed, then this is a good sign. Sometimes, a girl subconsciously makes some gestures, demonstrating body language signs of attraction.

Signs He’s into You: Body Language

In turn, women always want to know what men are thinking about in order to find out whether their feelings are mutual or not. Every girl wants to be aware of male body language signs of attraction not to find herself in an awkward situation. Here are several most common body language signs he likes you.

He Has Dilated Pupils

Pupils can dilate in two cases: when you are in a dark place, and when your brain sends a signal that something has attracted you. This is an impulse. Therefore, if you are hanging out in a lighted place, look into his eyes.

When men are interested in something, they open their eyes wide and raise their eyebrows. Note such a sign, this means that you attract him, and he carefully listens to what you are talking about.

A man subconsciously smiles broadly only when he is really happy. So, if he often smiles at you, you should know that a man feels comfortable, and you cheer him up. This is one of the men’s body language sure signs of attraction.

He Looks at You

Everybody knows that when a person is in love, they cannot take their eyes off their beloved one, and they look at each other for a long time. So, if a man looks at your face (eyes, nose, lips), then in 80 percent of cases, this is one of the signs he is attracted to your body language.

He Takes a Deep Breath

You may think that he is nervous, but that’s not exactly true. When a man takes a deep breath, it means that subconsciously, he wants to look more attractive and even desirable. You can be sure that he is keen to get your attention and make an impression.

He Stands with the Hands on His Hips

This is a typical posture of men who want to show their strength and dominance. Such a sign means that he “occupies this territory” and wants to impress you. In addition, it is a sign for other men to keep away. Now, he wants to take care of the safety and comfort of his woman.

He Leans Towards You

If regardless of the situation when you are close to each other and have a conversation, he constantly leans towards you, this indicates that he wants emotional intimacy.

Any spontaneous tactile contact belongs to the body language signs he’s falling for you. In addition, doing that, a man may check how much his touches are pleasant to you.

His Toes Are Turned Towards You

Body language specialists say that in such a situation, the legs indicate where the heart wants to go. He does that completely subconsciously, so it’s important to notice these small changes. For example, when you sit and talk, look in “which way the wind is blowing.” 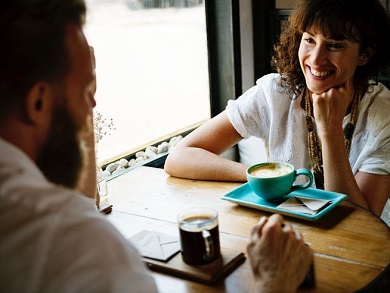 He Touches His Neck or Throat

When he touches his neck during a conversation, it is one of the signs he secretly likes your body language, and he is interested in you and wants to look good in your eyes. However, be careful! This sign can be used to tease you. Look at the context of the conversation and try to notice the other signs to conclude what it really means.

He Tries to Walk Side by Side

This is not about a situation when he holds your hand and goes forward to break through the crowd. Pay attention to this point when, for example, you are walking in the park. If he tries to keep close, walking side by side, he is interested in you.

He “Plays” with Objects

If a man touches his glass, phone or other things when you talk about something, it may mean that he is nervous and shy because he likes you, and he tries to look sharp and worthy.

Body Language Signs He Is Jealous

Sometimes, everyone can be jealous. However, this feeling can be shown quite specifically in every case. It can be different both in external manifestations and individual inner experiences. Of course, it is primarily determined by personal characteristics and its root causes, but a certain number of body language signs are common for all men. When a man is jealous, his soul can be filled with anger, suspicion, contempt or revulsion, and each of these states can be reflected on his face. So, what body language signs can tell you that your partner is jealous?

When you see that the man puts his hand on his mouth, this is a sign that he tries to hide his position and does not want to express it. Touching his lips with a pen, a glass of wine, a business card or something else, a man “bans” himself from saying what he really thinks. Psychologists have long noticed that touching a nose or a dimple of a nose during a conversation speaks about the insincerity of the interlocutor and their outright lies. Besides, if he rubs his eyelid, this gesture can tell about his strong mistrust.

You can see that the muscles of his forehead are shifted in and down, creating a threatening or frowning expression of the eyes. His nostrils are dilated, and the nose alae are raised. His lips are tightly pursed, and the face can turn red. Besides, usually, a jealous and angry man has clenched fists.

When a man is sure that his girlfriend is cheating on him, in addition to anger he can feel revulsion. Such a person will have lowered eyebrows, and he will wrinkle his nose and jut his lower lip out.

If your boyfriend feels contempt, then he will raise his eyebrow and will have as if a long face. His head will be raised as if he is looking down and tries to distance himself from you. Besides, if your boyfriend is a smoker, and he flips the ash off cigarette too often, it can tell about his painful internal state and nervousness.

Is It Bad to Break Up with Someone Over Text?